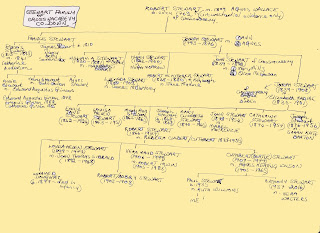 One of the most prominent farming families in this Moneyreagh area were the Huddlestons.  In 1844 Robert Huddleston, a poet, published a volume of his works, 'A Collection of Poems and Songs on Rural Subjects.' Included at the end of the collection was a list of subscribers, and these include Joseph Stewart of Gransha and William A. Stewart of Crossnacreevy;  William was only 18 when he subscribed to his neighbour's book.

William A. Stewart married Margaret Burke in Downpatrick Registry Office on 27th December 1851. William, the son of the farmer, Joseph Stewart of Crossnacreevy, was a hosteler living at 29 Prince's Street, Belfast, while Margaret was the daughter of a labourer, John Burke, with an address at the time of her marriage in Downpatrick.  The witnesses were William Lascelles and Agnes Crothers.

It seems that the family of Margaret Burke had their origins in Leveroge, Drumbo, Co. Down,  south of Lisburn,  since a known cousin was Hugh Geddes Burke who originated there.
http://alison-stewart.blogspot.ie/2013/04/hugh-burke-cousin-of-jane-orr-nee.html

William Stewart can be traced through the Belfast street directories.  In 1851, at the time of his marriage to Margaret Burke, he was at 29 Prince's Street, as he was in 1865, and ran an eating-house and stabling yard there.  In 1863, the street directories note him at 18 Marlborough Street, which actually runs into Prince's Street.
Prince's Street and Marlborough Street intersect Ann Street, where, on 9th February 1868, William's younger brother, Joseph Stewart - our great-great grandfather - was living at 88 Ann Street when his wife, Elizabeth Madine gave birth to a second stillborn child who they named Joseph.  88 Ann Street is on the corner of Prince's Street where William A. Stewart had his eating house and stabling yard.

In 1875, when William's daughter,Jane Stewart, married James M. Orr, she was living at 50 New Lodge Road, which is where William A. Stewart and his family were living in 1881, the year of William's death.

William A. Stewart gave up his stabling yard in about 1868, according to evidence given to his 1881 inquest by his daughter Margaret Stewart and was subsequently unemployed - perhaps the William Stewart who ran a pub at 92 Ann Street in the 1870s was a different man altogether?

The Children of William A. Stewart and Margaret Burke:

It is known from the records that the couple had four daughters.
The children of William and Margaret were born prior to official registration, but Jane Stewart was born circa 1855 in Belfast, and her sister, Margaret was born circa 1859.  There was also  a sister, Agnes Stewart,  who witnessed Jane's wedding to James M. Orr and who was named in newspaper reports of 1881 when her father committed suicide at home.
Jane Stewart was working as a machinist prior to her 1875 marriage to James Orr.   Margaret was working locally in York Street Mill in 1881, while daughter Agnes, in 1881, was working for the Belfast linen company, Betzolds of Fountain Street.
There was also a fourth, unnamed, daughter who was living at home in 50 New Lodge Road in 1881 when her father killed himself.  A later report of court proceedings in the Belfast Morning News of 15th February 1882, in which the widowed Margaret Stewart, née Burke, struggled to get a life insurance payment of £6 10s. from the City of Glasgow Friendly Society, mentioned incorrectly that William A. Stewart's widow was named Agnes, and that a daughter was named Sarah Stewart.  Although the newspaper report in this instant got several facts wrong, perhaps the fourth daughter really was named Sarah Stewart?

On 26th October 1871 in York Street Non-Subscribing Presbyterian Church in Belfast city centre, William A. Stewart's brother, John Stewart of Crossnacreevy, married his second wife, Elizabeth McGowan.  Elizabeth was the daughter of John McGowan, a labourer of Ballystockart, Comber, Co. Down.  William A. Stewart was one of the witnesses at the wedding.   The brothers' sister, Mary Stewart, had earlier married Hugh Morrow in the same York Street church  on 13th Sept. 1865.   (Another brother was Robert Stewart who married  Jane Madine  in Killinchy Non-Subscribing Presbyterian Church  on July 9th 1860.  Both bride and groom were living in the Madine's hometown of Killyleagh at the time of the marriage and Robert Stewart gave his profession as a mechanic.  Jane was the youngest sister of Elizabeth Madine who was married to another of the Stewart brothers, Joseph Stewart from whom we directly descend.)
I've often wondered why the siblings married in central Belfast rather than make the short trip home to Crossnacreevy, Moneyreagh,  and marry there - it turns out that a local Moneyreagh native, Rev. John Jelllie, had been the Unitarian minister at home until 30th December 1861, when he had accepted a new post at York Street Non-Subscribing Presbyterian Street in central Belfast, so it seems that both John and Mary Stewart chose to be married by their old minister in his new premises.  Our own direct ancestor, Joseph Stewart, another of these Stewart siblings, chose to marry in the Church of Ireland faith, probably because this was his wife's preferred church.

William A. Stewart died under tragic circumstances on 3rd December 1881 at 50 New Lodge Road;  the newspapers recorded that he died from a head wound inflicted with a hammer.  An inquest concluded that he'd committed suicide by fracturing his skull while in a state of unsound mind.

From 'The Belfast Telegraph' of Dec.5th 1881:  'An inquest was held on Saturday on the body of Wm. Stewart, who was found dead with his head broken, in the yard of his house in New Lodge Road that morning.  Evidence was given that, for the past two months, the deceased talked foolishly.  The Coroner described the case as a most extraordinary one.  The jury returned a verdict of suicide, while in an unsound state of mind.'

Following her husband's death,  Margaret Stewart, née Burke, moved from 50 New Lodge Road and was noted at Limestone Street (or Road) in October 1884.

Her two daughters, Jane Orr and Margaret Stewart, emigrated to Philadelphia shortly after this, along with Jane's husband, James M. Orr.    They kept in contact with their cousins, the four daughters of Joseph Stewart and Elizabeth Madine, who had settled in Dublin in the 1880's.

Posted by Alison Stewart at 11:59 No comments: