The Family of Thomas Willis of Portarlington

Thomas Willis of Portarlington, Co. Laois, was the grandfather of our maternal geat-great-grandmother, Geraldine O'Moore Creighton.  He had been born circa 1748 at the family estate of Mount Eagle in Ballyroan townland, midway between the towns of Portlaoise and Abbeyleix in County Laois/Queen's County.

His father was Rev. Thomas Willis, who was reputed to have been chaplain to the forces of William of Orange, although I can find no record of him as such. What is recorded is that, from about 1691, Rev. Thomas Willis was leasing Ballyroan from the Bishop of either Waterford or Wexford.  He died at Ballyroan in 1760, aged over 100 years old, and it is said, that at the age of 90, he ran a race with his own sons and beat them.

A current English descendant of the Willis family, Graham Willis, has kindly shared his Willis research with me, which shows a highly plausible link between his own English Willis family and the above Rev. Thomas Willis, who settled in Ballyroan in about 1691.   As can be seen  from the photo below of the Thomas Willis memorial window in Portarlington, the Irish Willis family carried the same, or similar, coat of arms (seen on the left of the window) as was used by the Cambridgeshire/Warwickshire Willis families.

As the Rev. Thomas Willis of Ballyroan was a cleric, he would have had to have attended either Oxford or Cambridge, and the university records reveal a likely link.  A Thomas Willis matriculated from Pembroke College, Oxford, on 1st July 1674, aged 14, and received an M.A. in 1683 from Clare College, Cambridge.  The same records name him as possibly the rector of St. Dominick, Cornwall, in 1684, and also possibly of Bishopton, Glamorgan in 1685, or vicar of Weston-upon-Avon in 1689, but there is no further record of him in England beyond this, which would tally with a possible move to Ballyroan, Ireland, by 1691.

This Rev. Thomas Willis was noted as the son of an earlier cleric, Thomas Willis, who had been born in Isleworth or Thistleworth in Middlesex, to a celebrated schoolmaster, Thomas Willis.  The family of the schoolmaster, Thomas Willis, spent a few years in Lynn, Massachusetts, before returning home to Isleworth in 1641 at the time of the English Civil War, where the younger man, Rev. Thomas Willis, served as chaplain to the parliamentary forces.  He served as vicar of Twickenham until 1660, the time of the Restoration, when his parishioners had him removed.  By 1670, however, he had been appointed as Chaplain in Ordinary to Charles II - if Rev. Thomas Willis of Ballyroan was indeed the son of this Rev. Thomas Willis of Middlesex, has a form of genealogical Chinese whispers crept into our Irish family genealogy here?  Thomas of Ballyroan was, as noted earlier, reputed to have been Chaplain to the forces of William of Orange in the 1690s prior to settling in Portarlington, however I've found no reference to him in the official records of the campaign.  Are we confusing him with his father who had, indeed, served as chaplain to royalty, ie, Charles II?   This elder Rev. Thomas Willis was afterwards appointed vicar of Kingston-upon Thames in 1671, dying there in 1692.

The father of the elder Rev. Thomas Willis was, as already mentioned, the schoolmaster Thomas Willis of Isleworth, Middlesex, who had been born in Fenny Compton, Warwickshirem and who matriculated from St. John's College on 11th June 1602 aged 19.  The son of Richard Willis of Fenny Compton, he served as schoolmaster at Isleworth/Thistleworth for fifty years.
The Willis family of Fenny Compton, Warwickshire, are well-documented, both in England and in Massachusetts where a branch of the family settled, and can be traced back to a Thomas Wylles of Compton Magna in 1330.


Thomas Willis,  son of Rev. Thomas Willis of Ballyroan, was the master of one of 16 celebrated schools which operated in the Huguenot colony of Portarlington in the 18th and 19th centuries. These schools, which taught their pupils for the most part through French, gained huge popularity during the Anglo-French wars when the aristocracy were unable to send their children abroad for a sophisticated European education.

Thomas Willis trained at the school of Mr. Hood in Lower Patrick Street, before opening his own establishment, along with hisfirst wife, Betty Foster, in April 1783.  The 'Dublin Evening POst' of 12th April 1783 announced that a french school would be opening on the 1st of August 1783 for young gentlemen, no more than 25 of them, and would be run by Mr. and Mrs. Willis who had previously been assistants in the Portarlington school of Mr. Hood.  Mr. Willis had worked there for the previous thirteen years, while his wife had worked there for five.

(The only Hood of Portarlington I can trace, apart from the schoolmaster, is a possible daughter, Albertine Sarah Hood, who married Rev. Richard Roe of Springhill, Queen's County, in September 1790;  she would die in Cullenswood Avenue, Rathmines, Co. Dublin, in April 1829.  A Rev. Richard Roe was the minister of St. Peter's, Dublin, at one time a Huguenot/French Church.)

Amongst others, Thomas Willis educated the brothers of the Duke of Wellington, the Duke himself going to school in his hometown of Trim, Co. Meath.  The register of the French Church records the death of one of Thomas's pupils - on 21st November 1802, George Perry, a pupil of Thomas Willis, died aged 12.

Thomas Willis kept his school in an old house by the bridge, a house which had been built in the early days of the colony by Daniel Le Grand du Petit Bosc.  The school was known as Arlington House.

In February 1810, Mr. Willis of Portarlington was letting, for 2 lives or for 26 years, 26 acres of land close to the town, and known as Inn Concerns in Ballyrone/Ballyroan. ('Dublin Evening Post', 13th February 1810.)

Later 'The Dublin Evening Post' of 19th September 1818 announced that the son of Thomas Willis, Rev. William Willis MD, was increasing the annual fees at his Portarlington school to 40 guineas.


The Journal of the Irish Memorials Association, formerly the Association for the Preservation of the Memorials of the Dead in Ireland, published in 1926 the Willis family Bible which had earlier been preserved at Portarlington.
I’ll transcribe it here:

1780:
Feby 13th - Married to my dear Betty Foster. (This is our many-times great grandmother who had worked alongside Thomas Willis in Mr. Hood's French School in Portarlington.)
Nov. 16 - Geo; my first child born and
Novr. 19 - He died


1788:
July 24 - Married to my dear Matty Beauchamp. (This name has a variety of different spellings.)

The Register of the French Church records both the burial of Matty (Beauchamp) Willis, Thomas' second wife, and the death of another daughter:
'Oct. 28th 1788 - Martha Willis, 26 Oct - wife of schoolmaster Thomas Willis, aged 34 years. Buried in the churchyard by Dr. Pierre Hamon.'
'Willis, 16th August 1800, a daughter of Thos. Willis aged 9 months.'

Happily, the registers of the French Church at Portarlington also survive. I’ll transcribe them in English here:

This is probably the mother of Mary Anne Newcombe, who was Thomas Willis’ third wife: ‘1780, July 13th. Francoise Newcombe - on the 11th day of this month, Francoise Newcombe (née Laval), died with the Lord, aged 40 years, and was buried in the cemetery of this church today, the 13th of July 1780, by me, V. Desvoeux, Pastor.’

‘The burial of Mrs. Foster - on the second of August 1815, Mrs. Foster, née Harte, the mother-in-law of Thomas Willis, was buried.’  (Thomas's mother-in-law was Sarah Foster born to James and Jane Hart.)

This is most likely the baptism of Matty Beauchamp, Thomas Willis’ second wife; she would have been 33 at the time of their marriage, and 34 when she died the following year in 1789.
‘1755. Baptism. Marthe Beauchamp - On Thursday 7th of August, 1755, a daughter was born to Mr. Samuel Beauchamp; she was baptised on Friday 29th of the same month, and has been named Marthe; godfather Mr. Joseph Rigail; godmothers the Misses Elizabeth Condé and Marie Beauchamp, the sister of the child. G. Caillard, Pastor.’

‘Burial. Mrs. Willis. On Wednesday the 20th of June 1804, the wife of Thomas Willis, schoolmaster, Mrs. Mary Anne Willis, died; she has been interred in our cemetery by Mr. Richard Clarke, the minister of the English Chapel of Portarlington, on Friday the 22nd of the same month, John Vignolles, Pastor.’

The Beauchamp family feature heavily in the Register. The first of the family to settle in Ireland was Jaques Beauchant, a retired corporal in Galway's Regiment of Horse, who was noted as a prominent shopkeeper/merchant in Portarlington by 1714, and who died on 8th January 1712/1713. (The early records in the register of the French Church in Portarlington give the two dates side by side.)
Jaques was married to a woman named Marie who would died in Portarlington on 20th May 1756.

1) Madeleine-Marie Beauchamp, born 11th April 1743, was baptised by Mr. Arthur Champagné, the minister of Mosteroris Parish near Edenderry;  her grandmother was named as Marie Beauchant.
2) Henriette Beauchamp, born 28th April 1744 - she was baptised at home and her godfather was Jaques Beauchant, most likely an uncle, the brother of her father Samuel Beauchant.
3) Jaques Marc Beauchant born 21st July 1745; a merchant of Portarlington, he died, aged 41, on 23rd May 1788.
4) Marianne Beauchamp born 2nd September 1746.
5) Elisabet Beauchamp born 12th April 1748.
6) Samuel Paul Beauchant, born 9th September 1749 - his mother was erroneously named as Henriette.
7) Theophile Beauchamp born 14th November 1750, he was later mentioned in several family deeds.
8) Susane Bauchant born 10th November 1751.
9) Bonne Louise Beauchant  - born on 18th November 1752, she was presented for baptism by Mademoiselle Henrietta de Laval   - she was later known as the simpler Louise and married a Major Hall of Dublin.
10) Marthe (ie Matty) Beauchamp, who married Thomas Willis as his second wife, was born 7th August 1755. Her godmother was her older sister, Marie Beauchant.  Her mother, Marianne Beauchant, died three weeks after her birth on 26th October 1789.  ‘Burial. Madame Marianne Beauchamp - on Sunday 31st of August 1755, Madame Marianne Beauchamp, wife of Samuel Beauchamp, died with the Lord and was buried in our cemetery on the following Wednesday, the 3rd of September. G.Caillard, Pastor.’

The tombstone inscription of Samuel and Marianne was recorded by the Journal of the Irish Memorials Association, although the dates don't entirely match the church registers:
‘Here lyeth the body of Samuel Beauchant, Merchant, who departed this life at Portarlington, the 10th day of November 1776 / Aged 68 years / And also the Body of Mrs. MaryAnn Beauchant his Wife who departed this life the 10th day of Octr. 1755 Aged 42 years.’

A child, Francoise, died on 20th October 1755, aged 14 months, but her birth was not recorded - she was either the daughter of Jaques Beauchant, the possible brother of Samuel Beauchant, or another daughter of Samuel and Marianne Beauchant.


It seems that Thomas Willis's daughter, Eliza, attended the French Church. Her marriage to the Presbyterian minister, Rev. David Hill Creighton,  in 1810 was recorded in the register, as was the death of a daughter two years later:
'1812  Louise Creighton, 25th Dec., 1 years old.' 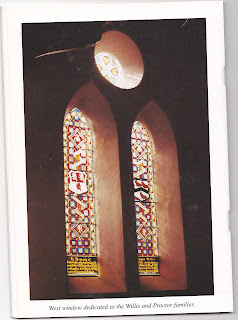 Email ThisBlogThis!Share to TwitterShare to FacebookShare to Pinterest
Labels: Willis