It is said that Thomas Barnardo, the Dublin-born founder of the Barnardo Childrens' Homes and a friend of the Williams family, had given the young Willis a pet white rabbit when Barnardo left Dublin to train in London.

According to his daughter, Eliza Willis Williams, Willis spent some time at a boarding school in England when he was a child.  This was confirmed by the 1871 UK census, which showed the young Willis as a boarder at the school of Benjamin and Henrietta Ellis  at 56 and 57 St. Mary's Road, Camberwell, South London. Willis was aged either 14 or 15; whoever wrote out the census return wasn't sure about this.
He was a sporting individual - on 7th August 1875, aged about 21, he won first prize for a three-mile walk in the O'Connell Centenary Athletic Sports.  The following year he won second prize in the four-mile open walking race of the D.U.A.S.  (Dublin United Athletic Society.)
In 1876 he took part in the Three Mile Walk at the Landsdowne Road Athletics Meeting. The following year he took part in the walking matches at the Rotundo Skating Rink.

In 1879, Willis Creighton Williams of Dundrum applied for a dog licence. 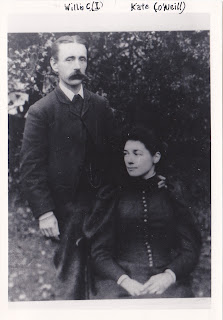 He married Kate O'Neill on 3rd March 1881 at Birkenhead, Cheshire (Liverpool) - at the time they were living at 12 Queen Street;  the following year they had moved to 53 Clarence Grove, Everton.  The marriage was witnessed by A.J.Gregory and L.B. Gregory, who seem to be Arthur James Gregory and Lilian Baxter Gregory, aged 17 and 19 on the 1881 UK Census, who were the children of Peter Gregory and Emma Ann Baxter - Peter Gregory was an accountant/clerk to the Board of Guardians;  in 1881, this family were living in Birkenhead at 19 Hamilton Square, Birkenhead.  Hamilton Square runs directly onto Argyle Street which swings around into Queen Street where Willis C. Williams and Kate O'Neill were living at the time of their 1881 marriage, so perhaps the two families were most likely friends with each other.
Both addresses are close to the Liverpool Docks and family tradition has it that Willis Creighton Williams worked for the City of Dublin Steam Packet Company like his father, Richard Williams, before him, although  later family members may be confusing Willis with his father, Richard.  Charles Wye Williams himself had lived in the same city - he had chosen Liverpool as a location for the company because of its harbour which was, in the 1820s, far superior to Dublin Port.

Following their 1881 marriage, the UK census captured the newly-weds living at 4 Kirkdale Road, Merseyside, Liverpool, where Willis was recorded as a house agent and tea dealer.  The census transcribed his name as Willie B. Williams;  Kate called herself Katie.  There were no children present in the household, which is peculiar, given that their eldest son, Willis Creighton Williams,  had been born in Liverpool in about 1875.

Kelly's Directory for Liverpool listed Willis Willams of 4 Kirkdale Road as a grocer in 1881.  The family were still in Liverpool when their second son, David Creighton Williams was born on 31st May 1882.

The Family of Kate O'Neill:
Kate O'Neill had been born to a farmer,  Henry Neill or O'Neill in Carrawaystick, Rathdrum, Co. Wicklow, on 29th August 1858 and was baptised in Rathdrum Catholic Church by her parents, Henry and Maria or Mary Neill.   The family name was 'Neill' at that time, although by the time of the 1901 census they seem to have preferred 'O'Neill'.

The earliest mention of the Neill family in conjunction with Carrawaystick occurs in the Rathdrum parish register.  On 24th March 1826, Joseph Neill and Ann Byrne were the sponsors at the baptism of Hester Byrne, the daughter of Michael and Margaret Byrne of Carrawaystick.
Also, on 29th November 1819, Thomas Neill and Caty Farrell were the sponsors in Carrawaystick of Margery Headon, when she was baptised by her parents, Thomas Headon or Heaton and Winny Byrne.


The Tithes Applotments of 1825 noted Patt and Thos. Neill, John Neil with William Fleming, Thos Snell (their landlord), and Michael and Matthew Fleming all farming in Carrawaystick.


Griffiths Valuation of  1854 showed Henry Neil at Carrawaystick, Knockrath, Ballinacor South, Co. Wicklow, farming 75 acres along with Nicholas Neil and William Shannon.  In the same townland was an Edward Neil.   A recent DNA test with Ancestry confirms me as a close relation of Nicholas Neil of Carrawaystick.

Nicholas Neill of Carrawaystick married Rose Byrne in Rathdrum on 28th January 1833; witnesses were James and Mary Fahy.   Son Patrick Neil was baptised on 5th June 1836 in Rathdrum - sponsors were Henry Neil and Mary Farrell.  A second Patrick was baptised by Nicholas and Rose Neill on 4th July 1840 in Carrawaystick  - sponsors were John Hyland and Mary Doyle.  Mary was baptised on 3rd December 1843 - her parents were of Glenamlure and the sponsors to the baptism were James and Bridget Byrne.  On 1st October 1846  Nicholas and Rose baptised their daughter, Sarah Neill ofGlenmalure; sponsors were Bernard Farrell and Elizabeth Wall.  Margaret Neill of Carrawaystick was baptised on 22nd April 1851; sponsors were Thomas Neill and Elizabeth Donnelly.
The daughter of Nicholas, Sarah Neill, married Mathew Flood in Wicklow on 9th October 1875; she would die in Ballinabarney, Greenane, Co. Wicklow, on 12 May 1923 - a Matthew Graham was present when she died.
On 11th July 1868, the daughter of Nicholas, Mary Neill of Clornee, married Christopher Kavanagh, the son of Mathew Kavanagh and Margaret Lambert of Drumgoff.  The witnesses were Jacob Kavanagh of Carrig and Margaret Neil of Knockrath.   In both 1901 and 1911, Mary and Christopher Kavanagh were living in Carrawaystick.

Edward Neil of Carrawaystick married Anne Grogan in Rathdrum on 26th September 1852; this was witnessed by Margaret Grogan and John Doyle.


Kate's parents, Henry and Maria Neill had married in Rathdrum Church on 1st October 1855;  the witnesses were Thomas and Elizabeth Neil, who might be the Thomas Neil and Elizabeth Doyle who settled in neighbouring Kirikee, Rathdrum.
(Thomas Neil and Elizabeth Doyle of Kirikee had:
Catherine Neil on 19th September 1859,  Patrick Neil on 26th December 1861, Thomas Neil, born 31st  October 1866, at Kirakee; the sponsors at the baptism were Maria Neil and Johanna Byrne.  The registration details mention a Mary Neill present at the birth in Kirakee. Margaret Neil was born at Kirikee to Thomas Neil and Elizabeth Doyle on 1st July 1870.  A servant, on 19th October 1896 she married John McEvoy of Kirikee, the son of an older John McEvoy.  This was witnessed by James McEvoy and Hannah Doyle.  In 1901, the young couple were still living in Kirikee with two sons, John and Peter, and with Margaret's elderly mother,  Elizabeth  Neil.
William Neill, aged 31, of Kirikee, son of Thomas Neill, married Mary Anne Butler, aged 22, the daughter of Andrew Butler, in Greenane on 19th May 1888.. The witnesses were John Doyle and Winifred (?) Butler.  Winifred was Mary Anne's sister, also the daughter of Andrew Butler of Ballinacor - she married James Connolly of Greenane, son of John Connolly, on 11th September 1893.   On 25th May 1889, William Neill and Mary Anne Butler of Ballintobay (?) had a son, Thomas Neill;  grandmother Elizabeth Neil of Kirikee was there for the birth.  In 1901 and 1911 the family of William and Mary Anne O'Neill were living in Ballinacor, Rathdrum.
A Kate Neill of Kirakee drowned, aged 8, on 8th May 1913.)

Kate's older brother, Patrick Neil of Carrawaystick, Rathdrum, married, in Greenane Church on 21st January 1883, Catherine Farrell of Corvilla, Rathdrum, the daughter of Bernard Farrell;  the marriage registration certifcate noted that both Henry Neil and Bernard Farrell were still alive in 1883.  The witnesses were Patrick Byrne and Mary Farrell.        Patrick Neil and Catherine Farrell had a son, Henry, in Carrawaystick on 29th July 1885.   On 24th May 1889, they also had Bernard Neile in Glenmalure; grandmother, Bridget Farrell, was present at Bernard's birth. 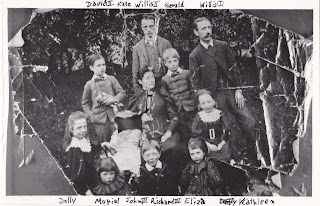 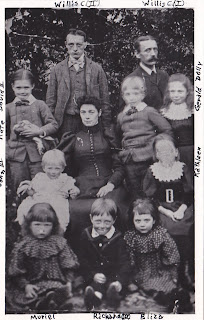 Willis Creighton Williams II, who the children regarded as their older brother and who died of typhoid fever aged 25.  It is believed by earlier members of my mother's family that Willis had been adopted at an early age by Willis and Kate.  I have no idea if this is true or not.  It appears that he had been born about 1875 - 6, several years before his parents' marriage although this in itself doesn't signify adoption. His date of birth was worked out from information on his death certificate and it's important to state that few people at this time actually knew what their real date of birth was.  Whatever his date of birth, he bears a striking resemblance in the above photo to one of our maternal Williams uncles.  Perhaps he had been born prior to the marriage of his parents, which might explain why Willis and Kate hadn't married at home in Dublin;  alternatively, he may have been born to one of his paternal or maternal aunts and have been adopted later by Willis and Kate.  I can find no record of his birth, but the 1901 Census states that he'd been born in England somewhere.

The younger Willis Creighton Williams worked in the Bank of Ireland in Limerick and then in Dublin, as did so many members of the Williams family. (My grandfather Richard Williams also worked for the bank as did his brothers John, David Creighton and Gerald O'Moore. On the 1911 census, they describe themselves as 'gentlemen' bank officials.) He was an enthusiastic musician and taught music; it is said he used a dummy piano to practice on.

In 1901 Willis Creighton Williams Junior was a boarder at 16 McMahon Street and, interestingly, gave his religion as Church of Ireland - the rest of his immediate family were Plymouth Brethren baptists. He died, aged 25, on 26th September 1901 in the Adelaide Hospital, Dublin, of typhoid fever and is buried in Mount Jerome Cemetery.

The Williams family were staunch members of Merrion Hall, the meeting place in Merrion Square of the Dublin Plymouth Brethren. Although Kate O'Neill had most likely converted from Catholicism, she was remembered as a mother who was keen on teaching the bible to her children.  The family would walk from their home in Sandyford to attend religious services in Merrion Hall, now the Davenport Hotel. 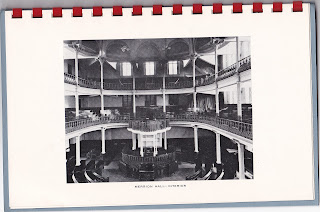 In 1910, the family were living at 50 Park Avenue, Sandymount.  On the 1911 Census, under 'occupation', Willis described his profession as 'gentleman bank official', while the working boys were described as gentlemen clerks etc.

Email ThisBlogThis!Share to TwitterShare to FacebookShare to Pinterest
Labels: Williams